Lake Palestine is located about 15 miles southwest of Tyler, Texas, on Texas Highway 155, the result of a dam on the Neches River owned and operated by the Upper Neches River Municipal Water Authority.

The lake is 18 miles long, stretching basically north to south, from Chander to near Frankston, with 135 miles of shoreline. The widest part of the lake is 4 miles across.

The crest of the spillway is 345 feet above mean sea level, and the conservation storage capacity is 411,290 acre-feet with a surface area of 25,560 acres. The drainage area above the dam is about 839 square miles. The maximum typical fluctuation is 2.2 feet.

The Neches River rises just east of Colfax in eastern Van Zandt County and flows southeast for 416 miles to its mouth on Sabine Lake, on the northeastern edge of Port Arthur. The Neches has a drainage area of 10,011 square miles.

During the Civil War, there were no bridges which crossed the Neches River. The use of ferries was the only effective means to cross the river, at Blackburn’s Crossing, Cannon’s Ferry and Stemson’s Perry. 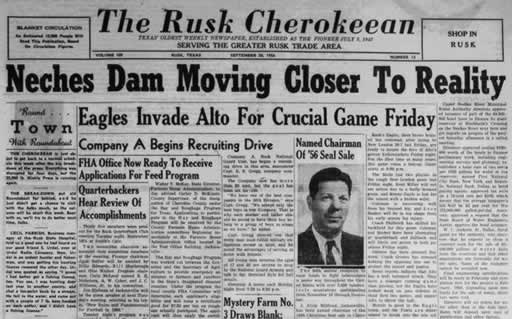 Copyright © 2021 LakePalestineTexas.com • All Rights Reserved
This website is operated by a private entity with no connection to the operation of Lake Palestine, and no affiliation with any federal, state or local government body.